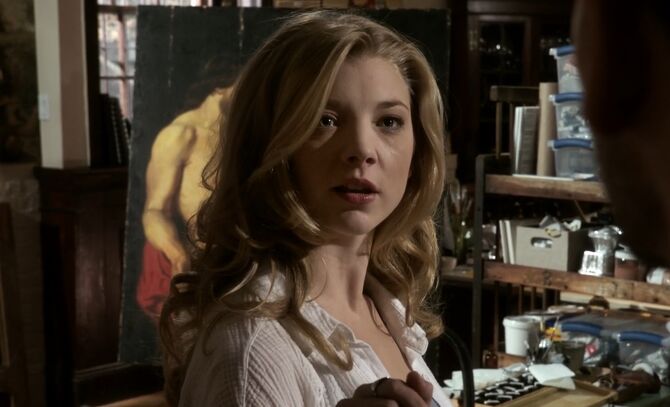 Jamie Moriarty is the nemesis of Sherlock Holmes. After Holmes interrupted several of her plans when he worked for Scotland Yard, she tricked him into falling in love with her so she could study him, knowing her as Irene Adler. Even after her arrest and imprisonment, she continues to have a great impact on him, and he writes her letters because she is the only person he can relate to.

Moriarty is a talented painter and art restorer. She also knows a great deal about paintings and art history.

Moriarty is criminal mastermind, capable of creating elaborate plans with a high degree of success, as well as an abiliy to memorize complex codes.

Moriarty is highly skilled in psychology. While not seeming to have a degree, she can read people very well, as well use it to manipulate them, and predict with a high degree of accuracy what most of them will do.

"The woman is a riddle wrapped in a mystery inside an enigma I've had sex with."
―Holmes, "The Diabolical Kind".

"The great love of my life is a homicidal maniac. No one's perfect."
―Holmes, "The Best Way Out Is Always Through".

Community content is available under CC-BY-SA unless otherwise noted.
Advertisement