According to Wikipedia, a title sequence is the method by which cinematic films or television programs present their title, key production and cast members, or both, utilizing conceptual visuals and sound. It usually follows but should not be confused with the opening credits, which are generally nothing more than a series of superimposed text.

The title sequence of Elementary was made by Prologue Films.[1]

There are four different title sequences used in Elementary that are chosen based on time.[2]

This is the most used title sequence. It starts with a rolling glass ball, which falls into a tripod while "Jonny Lee Miller" in letters appears. The ball continues and is led to be placed into the cylinder of a gun. The cylinder then spins and is placed into its place in the gun while "Lucy Liu" in letters appears. The next shot shows a spinning wheel of four guns, while "Jon Michael Hill" in letters appears. One of the guns fires, and shatters a wine glass with red wine which both fall onto the floor. The next shot shows a rat in a spinning wheel, making power to raise a bell while "and Aidan Quinn" in letters is shown. Another glass ball is rolling on a tripod and lands on a switch, which makes a scissor cut a cord, which lets go of the grip of a hammer that shatters a statue. The pieces of the statue fall onto the floor where evidence markers are already places on the floor. A cage falls upon a statue of a man, while "created by Robert Doherty" in letters are shown. Another ball rolls past the previously shattered wine glass, and continues to roll in a shot that closes in on the rolling ball. A background of New York with the sun shining through the buildings, with the letters forming "Elementary," is shown as the camera zooms in on the ball. Time length: 30 seconds.

Most shots are cut including the actor credits, with only "created by Robert Doherty" shown. Time length: 14 seconds.

Pieces of the letters of the word "Elementary" become more and more visible over time with a photo of New York in the background. Time length: 3 seconds.

Behind the scenes photos from the shoot of the title sequence was posted on Prologue Films Facebook page. 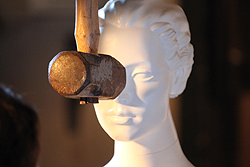 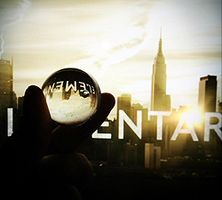 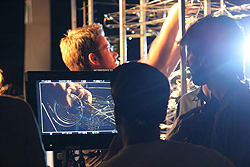 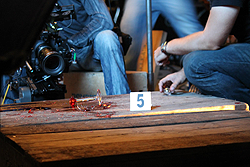 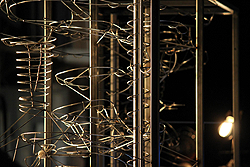 Retrieved from "https://cbselementary.fandom.com/wiki/Title_sequence?oldid=9043"
Community content is available under CC-BY-SA unless otherwise noted.